I don’t know what it is about Alberta (other than having a significant part of my family living there) but I’m kinda hooked on the place and have been since my first trip there (on my own) in 1997 when I was 8 years old.

Just a wee boy back then!

I’ve visited every few years since, my previous trip before this year was in 2006 and still I can’t get the idea of spending a few years really living there out of my head.

Anyway, on this trip other than spending time catching up with family before heading off to Mexico to begin this big trip I still got to catch an FC Edmonton ‘soccer’ game, head to Banff for a quick view of the Rocky Mountains and enjoy spending time in Edmonton, probably one of the world’s most underated cities – after all it still has some attractive architecture, formerly the world’s biggest shopping mall and events such as the Edmonton International Beer Festival (a big plus for me)!

I think I might be back at least in time for a Tim Hortons when I finish my this trip of a lifetime I’ve just embarked on through Central and South America – more to come on that soon!

Everyone knows I’m a little bit obsessed with football (or soccer as those crazy Yankees and Hosers like to call it). I’m normally obsessed with checking the Burnley score or often dragging my poor girlfriend Kat to East Lancashire. It’s good to know you’ve got a girlfriend who will text you the score when you’ve not got access to the scores.

I’m currently in Alberta in Canada visiting family. When I was asked what I wanted to do while over here, one of my first thoughts was to see FC Edmonton who are in the early stages of their season. Having been to games in the likes of Lithuania, Malaysia, China & Denmark as well as many hundreds in the UK I was keen to see a game here.

This brought me to Clarke Park, the home of FC Edmonton, a relatively newly formed team in the North American Soccer League (NASL) which is the tier below the MLS. The opposition were the Minnesota Stars. Having researched the team a little I soon realised that I recognised not a single player involved and thus my expectations were pretty low.

I haven’t had the best of luck this season with getting to games on time, having missed the opening goals at Burnley matches involving Birmingham, Norwich and Fulham (u-18) this season. Once again I was late to kick off (though this can be blamed on my cousin this time – sorry Mark) and again I missed a goal just as I was entering the stadium! As we got to our seats, Edmonton conceded a penalty to make it 1-1 so I suppose it could have been worse.

Clarke Park is only a small stadium, in fact it’s an artificial surface with American Football and Soccer lines painted on it with a single small stand in the shadow of Edmonton’s larger Commonwealth Stadium. Despite this, the crowd felt sizable and fairly loud helped with a drum and a cowbell (noise aids that I normally don’t like at games as it deters people from singing). 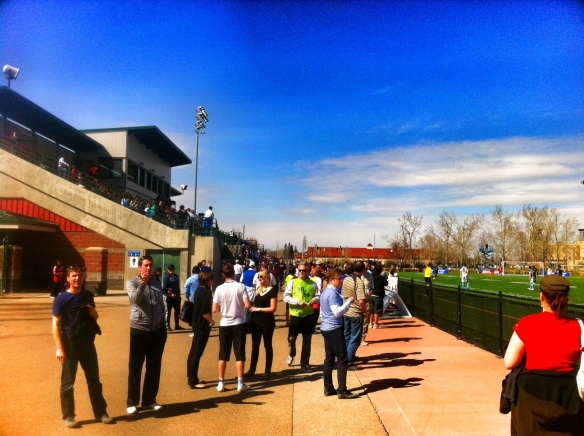 I have to say I was impressed with the enthusiasm of the fans. The Eddies, as they are known, have not yet won a competitive fixture this season while the team itself is just in its 3rd season. In fact Edmonton have had soccer teams in the city before but none have lasted particularly long so the turnout of fans will be important to any growth of the team and hopefully success. Many fans clearly had a significant interest in the sport as I saw shirts from Scotland, Real Madrid, Chelsea in addition to smaller teams such as Middlesbrough and Stoke City! If only I’d worn my Burnley shirt!

Sadly the quality of the football (or soccer, if you’re that way inclined) was pretty poor. Edmonton seemed to struggle to hold onto the ball while Minnesota could string a few passes together with little end product. They did however take the lead to make it 2-1 courtesy of an Edmonton goalkeeping error midway through the first half. Edmonton did find a way back into the game towards the end of the half thanks to a red card for a Minnesota defender bringing down an attacked clean through on goal.

At half time there is the usual fare of fans getting their moment on the pitch for a competition as well as the usual rush for food. One nice touch I liked was the chance for kids to have a try at kicking the ball through a hole and being given a token gift. Nice touch.

In the second half Edmonton took advantage of their advantage in numbers to grab 2 goals to make it 3-2 and it looked like they would collect their first 3 points of the season. However, Minnesota recovered thanks to a clever substitution and scored an equaliser. From here on in it looked like the away side would be the more likely winner, and as I suggested a last minute winner to my uncle they did just that by bundling home after some more casual defending by Edmonton.

I was a wee bit disappointed with the final result but as a game of football it was certainly entertaining. Alright, if you compared the standard on show to English or Scottish football you might be looking at someone such as Forest Green Rovers or Partick Thistle. It is at least a start and I would expect it to improve over the years given the catchment area of Edmonton and the growing profile of soccer in North America. I think I may even be keeping an eye on the fortunes of FC Edmonton alongside some of my other adopted clubs.

What I’ve been blathering on about